What are Static Seals? 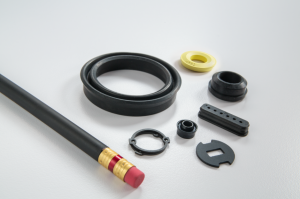 Let’s dive into the world of static seal applications.

Static seals are categorized as seals whose mating gland parts do not move relative to one another.  There is no motion in the sealing surface between the seal and gland.

A face seal (Illustration 4.1) is a type of static axial seal.  It seals on the face of the seal.  A groove is cut in a flat surface (green).  The o-ring (red) is placed in the groove and a second flat surface compresses the oring (blue).  This is a static application.  The o-ring does not move once it is installed. 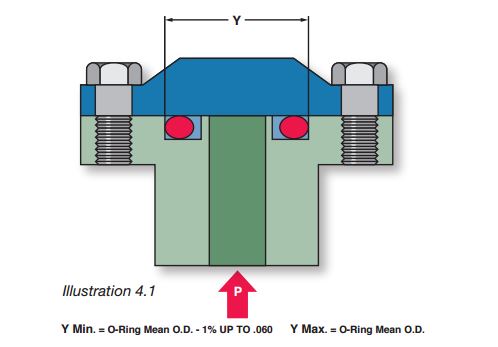 A crush seal (Illustration 4.4) is another type of static axial seal.  The o-ring is crushed into a triangular shape groove.  O-ring volume is usually 90-95% gland volume.  The o-ring is permanently deformed and considered non-reusable. 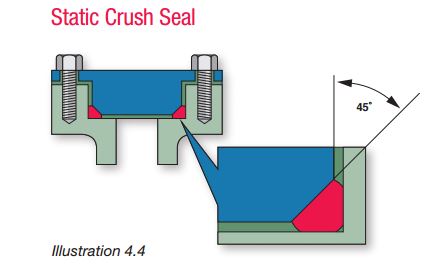 A Dovetail provides a retaining feature in a face seal gland.  If the groove design in illustration 4.5 was of a standard face seal, the o-ring would fall out as the valve cycles up.  The dovetail retains the o-ring in the groove.  The o-ring is forced into the dovetail on installation, possibly tearing the o-ring.  O-ring lubrication can minimize the chances of tearing. 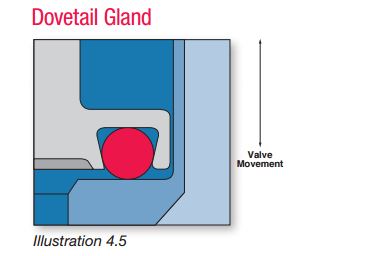 The sealing surfaces are perpendicular to the seal centerline in a radial seal orientation.  The sealing surfaces are on the inner and outer diameter, aka the cross section of the o-ring.  There are two variations of a radial seal.  One is a piston seal where the groove is on the piston, illustration to the right.  The second is a rod seal where the groove is on the bore, illustration to the left.

An axial seal orientation should be considered before a radial. Extrusion paths and tolerance stack up are simpler to control in an axial set up.  Groove depth is the only compression variable.  The plates are assumed to be parallel and flat having very little gap in between.  In a radial configuration,   there are tolerances on the bore diameter, groove diameter and piston or shaft diameters.  The diametric gap between the bore and shaft or piston is inevitable.  Poor tolerances will cause this gap to grow possibly allowing the O-Ring to extrude through it.  Excessive tolerances on the bore and groove diameters will affect compression.

Have questions on static seals? Check out our Seal Types and Gland Design Table or contact our engineering team.

What are Static Seals? was last modified: July 7th, 2016 by Romel Ner