Understanding the link between ozone and rubber deterioration

One of the first design consideration that engineers should take into account when working with rubber are the effects of ozone. The question must be asked — how much exposure should rubber have, and what is the expected life of the rubber product?

What can ozone do to rubber? A common effect includes cracking along the exposed, stretched, or stressed face — this is sometimes referred as dry rotting.

Ozone can be found everywhere. Even “normal” air can have up to 0.01 ppm of ozone. The addition of electrical equipment or lighting can increase the ppm level even greater.

Different rubber polymers will have greater or less resistance to ozone — the less saturated rubber polymer, for example, will experience greater ozone effects. Unsaturations are the amount of double and triple chemical bonds in the polymer structure, which become susceptible to the free radicals created by ozone and break the bonds.

The resistancy of a material will determine which applications it should be used for, such as car door seals and weather stripping. These are typically made of EPDM rubber, which is very stable in ozone and will last a long time.

In a small way, even seals that are used in an oil- or fuel-related application need to have some resistance to ozone to prevent deterioration in the warehouse storage after production.

Fortunately there are a few different standard test methods that help classify how a particular rubber behaves when exposed to ozone, such as ASTM D1171. Specifically, ASTM D1171 is the standard test method for rubber deterioration – surface ozone cracking outdoors or chamber (triangular specimens). The advantage of this method is that it can be tested against a predetermined rating, creating a pass/fail condition. The method can also be used to track the growth rate of cracks in a material to see how quickly it deteriorates.

This post is based on the chamber method. Apple Rubber utilizes a Mast/Keystone 700-10LTA ozone test chamber. This is simply a sealed chamber with an attached ozone generator that is regulated by an ozone meter. This test uses a specimen molded from the desired material in a triangular shape that has a base of .75 inches with a radius of .065 inches located .5 inches from the base of the triangle. The overall length of the specimen is 10 inches long. These pieces are then set in a strained position by securing them with wire and looping them over a two-inch mandrel.

Test preparation allows the mounted specimens 70-72 hours to condition at room temperature in the laboratory environment before moving them to the ozone chamber for another 70-72 hours at 40°C with no ozone generation. The preconditioning allows waxes to bloom to the surface, which protects the rubber if part of the rubber formula. 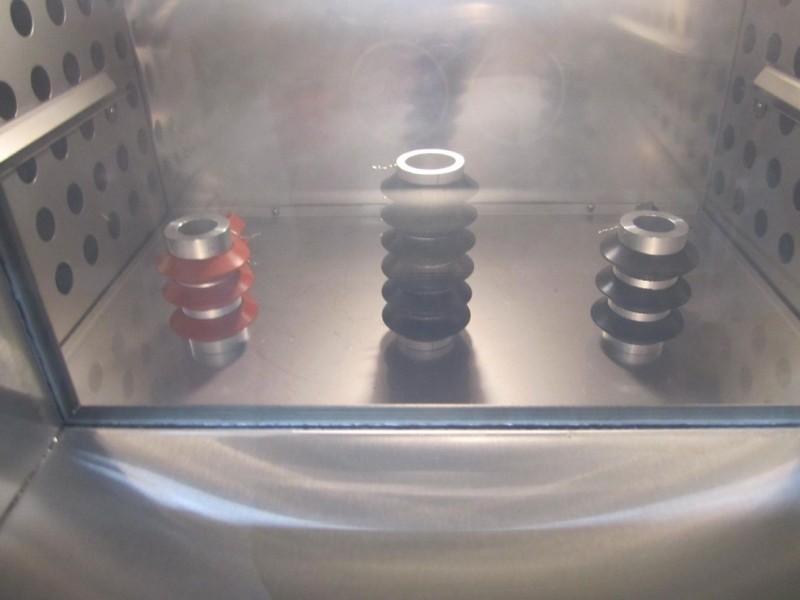 Specimens in chamber expose to ozone

The standard test exposure then proceeds at an ozone concentration of 50±5 pphm for 72 hours. After this period, the specimens are removed and given a rating based on a.) the amount of cracking under 2x magnification, and b.) their comparison to the given figure in the specification. It is also very common for the specimens to be removed at the 24-hour and 48-hour marks and be given ratings for those time periods, as well.

Below are three examples of these materials after the 72 hour period. The materials are an Eehylene propylene (EPDM) rubber, silicone, and an HNBR material. These materials tend to do very well and have a good rating of 0 when compared to the specification in terms of ozone degradation. 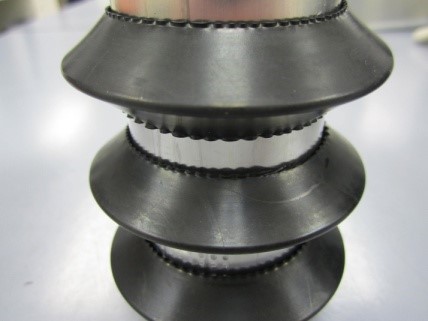 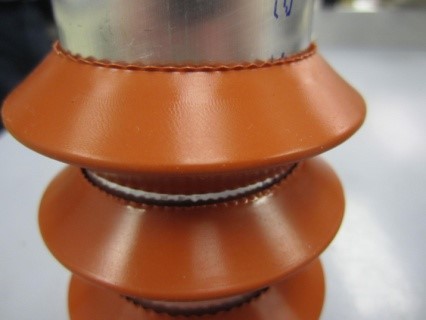 The final test specimen is a nitrile, which is not very ozone-resistant as evidenced by the growing cracks throughout the strained section of the test specimen. This sample would have the comparative rating of three, which is the worst rating that the specification can give. One can quickly understand that even if nitrile (buna-N) rubber is readily available, it might not be the best choice.

One example where we commonly see failure of design is in medical devices. During initial testing, the parts may work fine. In field testing, however, there may be failures because the O-ring is exposed to ozone, which causes a degree of deterioration that leads to failure. At times, design engineers can even see this process act out even if they simply let the medical device sit on their office desk for an extended time. 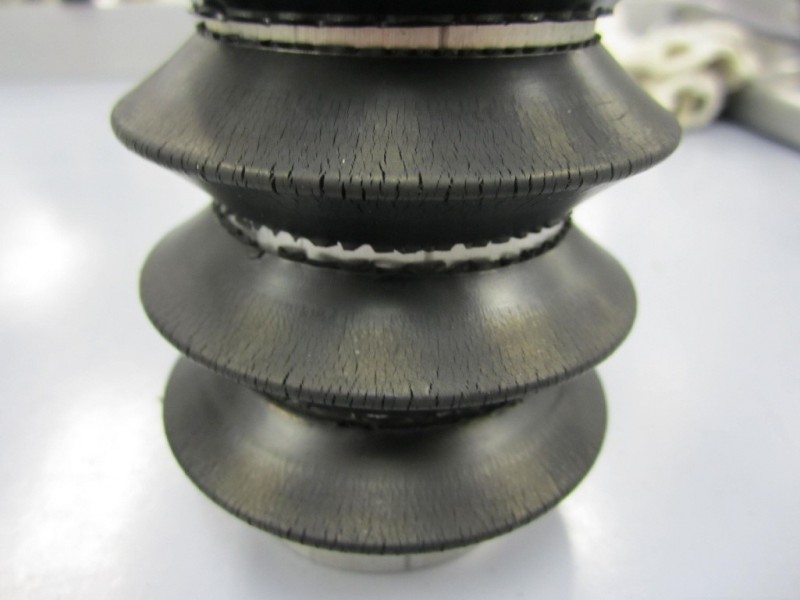 Sometimes, with materials that are known to be very resistant to ozone (such as ethylene propylene), some product developers also choose to increase the exposure time to follow the latter part of the test method. In this case, the exposure time within the ozone chamber is increased to six weeks, with the test specimens pulled out every two weeks to be examined for signs of cracking.

The final method that some developers use within this test method is an outdoor exposure rather than a controlled chamber. With this method, the parts are mounted so that they are exposed facing south at a 45° angle from the ground. The advantage to this method is that real-time exposure to weathering can be accomplished.

However, that same real-time exposure can also be a drawback. It is not always feasible to wait for such an extended period of time when designing a part to see when it starts to deteriorate, especially when using a weathering / ozone-resistant material.

When rubber polymers are attacked by ozone, a compounder will use waxes and antiozondiants (chemicals added to the formulation that scavenge up the free radicals created by the ozone before they attack the polymer backbone) to protect the rubber. Waxes bloom to the surface and protect the rubber by slowing the ozone penetration. This is commonly seen when purchasing new tires — a consumer can see the wax on the surface of the new tire. This is also why people who buy new bicycle or motorcycle tires are advised to ride slowly to remove the wax and create proper road friction before normal use.

EPDM, Silicone, HNBR, Neoprene, FKM, and Fluorosilicone rubber have greater resistance to ozone. Nitrile (Buna-N), natural rubber, and SBR will are more susceptible to ozone attack. Designs should always consider whether the rubber part will be exposed to ozone — even in storage. How long, once exposed, do you want the part to last? Will there be electrical motors or devices close to the rubber part? These are critical design questions that need to be considered first before selecting a rubber.

Understanding the link between ozone and rubber deterioration was last modified: August 26th, 2014 by Nathan Enser