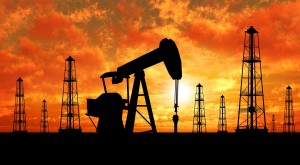 In a previous post, we explained what is meant by a line call-out and broke down ASTM D2000, the Standard Classification System for Rubber Products in Automotive Applications.

Now, it’s time for the next step: understanding rubber testing fluids – and how they correlate to real-life oil applications.

Listed below are the three basic suffixes used for fluid testing:

Standardized rubber testing fluids are important because they can give you a reference on how a compound will work in an application. Most rubber companies run standard test on each of their compounds to gain preliminary information on performance.

Illustrated in Table 1 is an example of standard fluids used to test for rubber volume swell. The table also shows how each fluid can be tested for application compatibility. 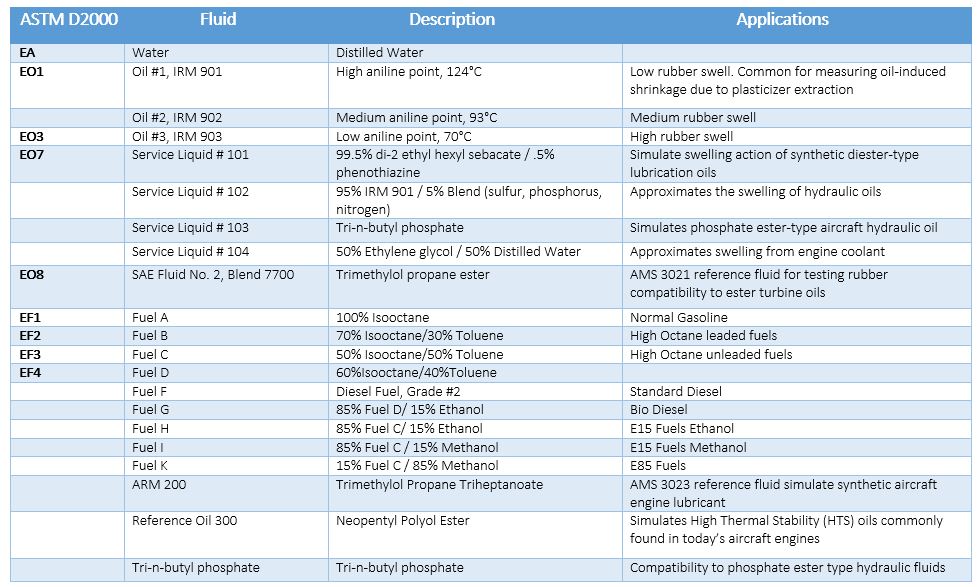 Note: In 1983, ASTM Oil #2 and Oil #3 became subject to cancer hazard warning labels by order of OSHA. The oils were replaced by IRM 902 and IRM 903, respectively (shown above). Because of this change, older data sheets may still list Oil # 2 and Oil # 3. These improved oils should give similar testing results to the older oils, but may have some variance. Testing will assure that the materials meets specification to the new oils.

The table below demonstrates how each group of oil is used in different industries. The aniline point — the minimum temperature at which the oil is completely miscible with an equal volume of aniline – indicates which oil types are closely comparable.

Consider the differences between the two:

Methanol: Made from coal or natural gas. Generally cheaper and less flammable than Ethanol.

Ethanol: Made from renewable feed stocks like sugar cane or corn. Less chemically toxic and offers more energy per gallon.

If fuel systems are compatible for these types of blends, it should not matter whether Methanol or Ethanol is used. Problems, however, arise when older seals come into contact with these blends. The polymer type might not be compatible with the alcohols, which could result in seal failures.

Other applications for standardized rubber testing fluids are tested by Underwriters Laboratories (UL). UL157 is the standard for testing rubber gaskets and seals. This standard is generally based on how a company lists a product’s end-use application. UL uses different reference fluids to test compatibility:

1). The combination of additives. Oils typically have additives that can attack different rubber polymers. New Automatic Transmission Fluids (ATF) have amine-based oxidation protection that can attack standard FKM polymers, leading to brittleness in the rubber compound and seal failure. This condition typically would not show up when testing with reference fluids, since these protective packages are not added to the standard oils.

The best way to avoid this problem is to complete rubber compatibility studies with the actual oil that contains the protective packages.

2). Rubber shrinkage from exposure to reference fluids. Some reference fluids will extract the plasticizers used in the rubber formulation, causing the test to show a swell. Once the rubber is removed from the fluid testing and exposed to air, oils or solvents can then release from the rubber and result in a negative swell.

For example, Nitrile rubber is exposed to n-Hexane for UL propane testing. The n-Hexane can extract some of the Nitrile plasticizer. When the compound is removed from the n-Hexane, it permeates out of the Nitrile during dry-out and can cause a shrinkage. This causes issues — because now, the seal may lose compression.

To prevent this situation, use the correct plasticizer, since it will be extracted by the n-Hexane.

Every effort should be made to test rubber seals and gaskets in the media in which they will perform. Standard reference fluids give a great indication of how a compound will perform. These fluids are also more readily available. Many rubber companies will offer material compatibility testing to their customers as a value-added service.

Questions? Please leave your thoughts in the Comments section or tweet us @AppleRubber.