How Are Your Seals Affecting Your Brew? 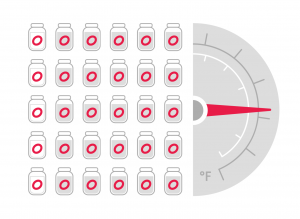 With craft and home brewing becoming more popular than ever, it seems like more and more brewers are able to gain a market for their beer and scale up to opening their own brewhouse or grow into distribution. With growing opportunities, the need for fermentation equipment continues to increase, and the need for rubber seals to ensure every drop of precious beer makes it through the brewing process.

A lot of hard work goes into developing a recipe, and brewmasters often worry about how a rubber seal can fail, leading to wasted product and money. Many brewers also may not realize that the seal they use could alter the taste of their beer. To help you get a better understanding of just how rubber seals can affect the brewing process, we decided to test some of our own rubber compounds in several different styles of craft beer to see how they hold up to the hottest part of the brewing process, and how they might affect the taste of any brew you make.

To start this off, we chose five of our common FDA compliant materials to test into five different craft brews. FDA compliant means that these elastomers are formulated using FDA whitelist ingredients, also known as 21 CFR 177.2600, which is a guideline for creating rubber articles for repeated use. We picked materials from a variety of different elastomer types.

The test materials we used are nitrile (32BN7AP), EPDM (53EP7AP), fluorocarbon (27VT7AP), HCR silicone (13SL7SX) and LSR (14SL7ML). The LSR is a platinum-cured material, nitrile is sulfur cured, and  EPDM, fluorocarbon and HCR silicone are all peroxide cured. In addition to the standard curing time of the test specimens of 10 minutes at 350°F, the silicones received a post-cure of 4 hours at 400°F and the fluorocarbon received a post-cure of 4 hours at 480°F.  Post curing is generally done to increase the material’s physical properties and strengthen their resistance to taking a compression set, which is typically the most desired property of seal material.

For craft beer, we also tried to pick from different styles to get a broader understanding of how differences in these brews might affect the elastomers. Ellicottville Brewing Companies Ellicottville IPA, Southern Tier’s Double Milk Stout, and Great Lakes Dortmunder Gold Lager were all chosen to be a good representation of common light and dark styles. While the MackJac Hard Cider Black Currant Passion and Westbrook Brewing Co. Gose were chosen specifically because ciders and sours tend to have a higher acidity to them, which is very important when looking into seal materials.

To test seal compatibility with the different brews, we submerged test pieces at 37°F and 194°F for 168 hours and measured the volume swell of the material. In the rubber world, volume swell is used as a general indicator of how resistant a material is to a given fluid. Higher swell means much more fluid has worked its way into a material, weakening it and destroying the integrity of the elastomer. Another potential outcome is a negative swell. In this case, the fluid actually extracts something out of the rubber, which is undesirable for two reasons: First, the extracted chemicals end up in the brew that was being created which may affect the taste.  Secondly, due to that same extraction, the seal would shrink in size. This could potentially lead to a loss of compression on the seal and the creation of leaks as an o-ring or gasket retracts from the materials it was supposed to seal. It is possible to get both extraction and a positive swell overall in an incompatible material. 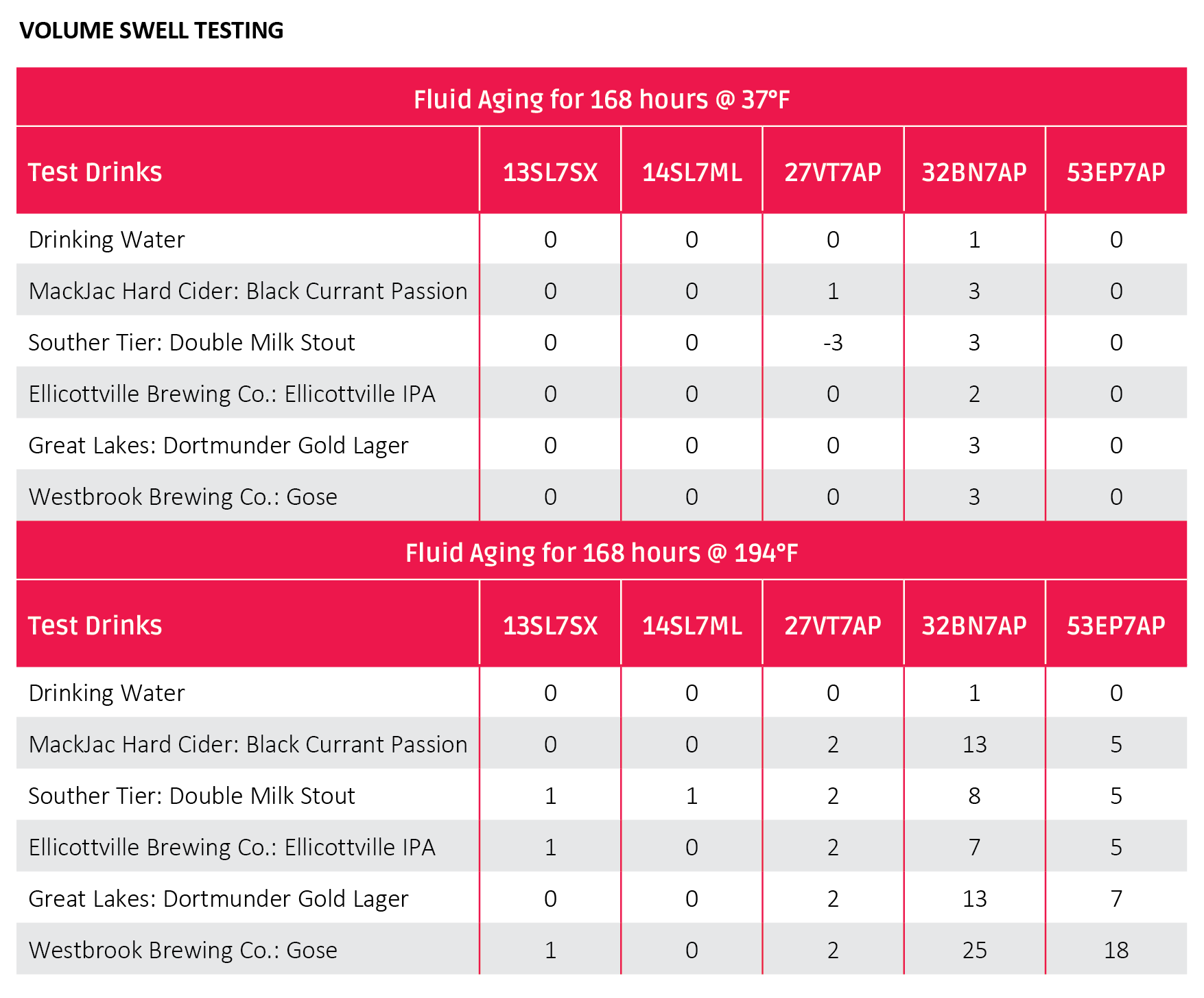 Taste-testing was something we had been both looking forward to and slightly dreading. Thirty mason jars were numbered and used to test each material in all five beverages and in tap water, which would act as a neutral and hopefully easier to detect taste in. After 168 Hours at 37°F, the test specimens were removed from the jars. The jars were then resealed so that our taste testers would be blind to the specific tests of each jar. Unexposed drinks were provided so that any taste differences from the original specimen could be derived.

Throughout this taste test, there were some mixed opinions on certain materials and an overwhelming agreement on the negative effects of others. As an observation, it seemed to be easier for someone that preferred a particular style of beer to detect a potential subtle taste change. In contrast, the nitrile and EPDM changes to the taste were so strong that the changes could be smelled before anyone even tasted them, and only the bravest of our testers were willing actually to try them.

As an extra test, we wanted to see if we could reduce or remove the effect of the rubber on the taste of beer.  Given that the post-cured materials performed the best, we wanted to see if adding post-cure to the EPDM and nitrile could burn off any chemical that might be altering the taste of the beer. To achieve this, we took the 32BN7AP and the 53EP7AP and post cured them for 4 hours at 300°F before retesting them for 168 hours at 37°F. The results were very promising, as there was no smell and almost no detectable change in the taste of the tap water.

32BN7AP uses sulfur and sulfur donors to vulcanize the rubber. Post curing helps remove any un-consumed cures. The same goes for the peroxide cure EPDM–post curing reacts to any residual peroxide. The EU is getting away from sulfur cured materials for food and fluid contact. They also limit peroxides to a few types. In these cases, a taste test is also used for materials approved for contact with potable water.

Looking at the overall volume swell data, the silicone materials were virtually unaffected by any of the brews, and in my opinion, the only materials that did poorly were the 32BN7AP material in high acidity sour beer and the 27VT7AP, which had a negative swell in the stout.  The post-cured materials also performed the best when it came to the taste testing in the various brews and water. If you want a quality seal that isn’t going to affect the flavor of your beer, then silicone appears to be the best choice for your craft.

How Are Your Seals Affecting Your Brew?  was last modified: March 12th, 2020 by Nathan Enser