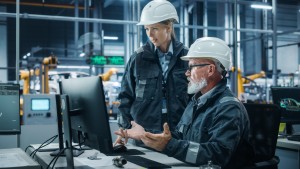 At Apple Rubber, we often get questions about feedability issues. The bad news is that if you recognize seal feedability problems during the production process, it’s probably too late for a simple solution. That’s exactly why we stress to our customers that it’s crucial to consider potential automated feedability during the early stages of design. By shining a spotlight on some surprisingly common issues, they can be avoided altogether. This is much less expensive than discovering an issue after an initial production run causes damage.

Here are some typical challenges to look for when dealing with automated feeding and assembly:

The Problem. Rubber seals often feed much differently during the automation process than plastic or metal components. Since plastic and metal seals have the physical properties to remain rigid in a feeder, many customers are unpleasantly surprised when rubber distortion becomes an issue. For example, silicone has unmatched temperature resistance, excellent mechanical properties, and great chemical resistance, making it a popular choice for seal molding. However, silicone also has a particularly sticky surface. When fed too closely or packaged too tightly, the sides of silicone seals often conform, stick together, and sometimes even break during automation.

The Solution. When customers ask for a specific material that will be used in an automated manufacturing process, it’s key to take a closer look at the makeup of the component and make adjustments accordingly. Does the material have the physical properties to withstand automation? Are there changes that can be made to an automated system that will allow feedability? Should a different material be chosen for the product design? Since some surfaces may not be ideal for automated assembly, it’s imperative that proactive engineers consider material feedability challenges in the design stage.

The Problem. As seals and o-rings move through vibratory bowl feeders, the friction caused by their movements generates the charged ions we refer to as static. This static electricity can be a concern when feeding materials like silicone because static causes the product pieces to cling to each other and to the surfaces of the feeding system. This cling can cause the machines to jam, ruining products and damaging machines. Surface texture (smoothness or roughness), surface contact, material type, and humidity are some factors that affect the generation of static electricity.

The Solution. Special ionizers can be added to automatic systems to neutralize charged ions by blowing charged air into the system. Coatings or surface treatments such as Teflon, graphite, liquid silicone topcoat and Parylene can be used to make surfaces smoother, limiting the amount of static.

Another way to control static electricity is to control the humidity in the production environment. A dry packaging environment might prevent some rubber surfaces from sticking to one another, but it also generates more static. In a humid environment, parts will create less static energy, but certain rubber compounds may stick together. During the packaging phase, anti-static bags can also be used to prevent static cling. Engineers must weigh these considerations beforehand and be fully aware of how static could be produced and controlled during automation.

The Problem. Found mostly in low-durometer, flexible parts like many rubber products, stiction refers to the friction that prevents stationary surfaces from being set in motion. This most often occurs with parts that have smooth, flat surfaces because there is greater surface contact between the product and machine parts. Stiction causes some rubber products such as seals to stick to each other and to production equipment as they are being molded or fed into machinery.

The Solution. To reduce stiction, manufacturers can apply a special coating or surface finish to the surfaces of the mold or feeder system. Coatings and finishes help create non-stick surfaces that reduce friction and allow for easier movement of the rubber products within the automated system. Common finishes include Teflon, graphite, coatings and, for the medical industry, Parylene.

Many customers may assume that a dull o-ring will not operate at peak performance. An o-ring does not need to have a high polish finish to be effective. As long as the o-ring is properly designed, leak paths will not be present. Parts with rough finishes will still seal properly if they are accurately fitted and well-designed. A surface roughness conversion chart is used to measure the surface finish of a mold, but rubber parts typically cannot be measured for surface finishes. Roughness average (RA) serves as the average measurement of peaks and valleys on a surface.

For customers who need a tailor-made finishing process, manufacturers also use high-energy finishing machines to roughen up the surface of a final part. When tacky materials have trouble sliding through the feeding assembly, finishing machines break up the seal surface and allow the parts to easily move down tracks or rails during assembly.

The Problem. Rubber is generally a tough material, but not all grades of durometer or rubber hardness can withstand automation. Silicone, for example, can have low durometers and sometimes cause problems with automatic feeding due to its soft and sticky physical properties. High-durometer, hard rubber parts like Urethane will always feed better than softer, low-durometer counterparts.

The Solution. To be successfully used in an automatic feeding system, an o-ring should be stiff enough to stand on end but flexible enough to stretch over the part. This quality is true for materials with durometers measuring approximately 70 shore or greater. This means that softer rubber compounds measuring 30 shore or less might not be a good choice for a product that will be produced using automation. They may, however, be successfully used with the help of coatings, surface finishes or other changes to the production environment such as temperature or humidity controls.

The Problem. Packaging also can cause issues during automated feeding. Certain o-rings – particularly ones with large inner diameter and small cross sections – will deform when stored for long periods of time. The o-ring will develop a curve due to the weight of the other o-rings in the packaging, and will give the “potato-chip” appearance. The choice of material, vacuum sealing, changes in humidity and other factors can exacerbate this seal stickiness. This problem can be especially apparent for products shipped overseas, which may be packed tightly and left in boxes for longer periods of time. Highly static compounds like silicone will build a static charge during shipment resulting in o-rings sticking to one another.
The Solution. To avoid packaging issues, consider the shape of the seal to make sure that – from a geometric perspective – there are no places where parts can fit together. Distortion must be compensated for when working with rubber parts. Make sure there are no facets to round, and if necessary, adding dimples or channels to the seals may help prevent those parts from touching or sticking during the packaging stage. Placing fewer parts in a loose bag and inducing air before sealing will also reduce the tendency of seals to scrunch or warp. Fewer parts per bag may require dividers, extra shipping space and potentially higher shipping costs – but will extend the life of the seals and avoid expensive manufacturing complications once production begins.