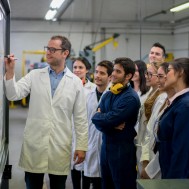 Here at Apple Rubber, we want to encourage the next generation of rubber engineers to start learning and innovating as soon as possible. Getting a handle on some of the jargon our experts use on a daily basis is a great way to start. That’s why our engineering team curated this helpful list of some of the terms we use most frequently. Whether you’re an aspiring engineer, need a refresher, or you’re just curious about our industry, get caught up on the terminology you need to know.

Formerly known as the American Society for Testing and Materials, this organization develops international standards for many materials, products, systems, and services.

The mechanical or chemical force that holds an elastomer to another object.

A bloom occurs when an incompatible liquid or solid migrates to the surface of rubber, often changing the surface’s appearance.

The likelihood of a material to crack under stress at low temperatures.

This material is essentially elemental carbon in the form of fine particles. Carbon black is one of the fillers commonly used in rubber production as a pigment or reinforcement

When a material is still elastic able to fully function when exposed to low temperatures.

A very common cause of o-ring seal failure. Compression set is when an elastomeric material doesn’t return to its original size after being compressed for a long time.

A polymer made of two different monomers.

Removing excess material (known as flash) from a finished product.

An instrument used to measure the indentation hardness of rubber.

A seal between a moving and stationary surface.

A material’s ability to return to its original shape after being manipulated or compressed.

A term describing natural and synthetic polymers that have the ability to return to their original shape after being distorted.

The Food and Drug Administration is a U.S. government agency that regulates ingredients used in food and medical applications.

Fillers can be used to improve consistency, durability, and performance in rubber products. Carbon Black is the most commonly used reinforcing filler in rubber production. Silica, talc and clay are other common fillers.

The ability of an elastomeric product to withstand stress from constant bending.

Excess rubber around a molded part.

A force which resists objects in motion.

The cavity where a seal is installed.

The glandular recess into which the seal is fitted.

The ability of rubbers to resist indentation. A durometer is used to measure hardness.

This machine injects molten rubber into a mold, creating a three dimensional object.

Short for the International Organization for Standardization, the ISO standardizes quality assurance in design, development, production, installation, and servicing.

Latex refers to any polymer in a water-based liquid or viscous state. The natural form of latex is a milky sap produced by a variety of rubber trees. This latex is the base substance used to produce Natural Rubber products. Synthetic latex is commonly used in dipping and spray applications.

A laboratory test of product resistance used to compare the performance capabilities of different product designs.

The ability of an elastomeric material to return to its original size and shape after being distorted or deformed.

The force in psi required to lengthen a material (usually to 100% elongation).

A device typically made from steel that is used to create and shape a product inside its cavity.

The surface roughness of a  mold which determines the surface quality of a finished molded product.

The mean dimension of a molded product, allowing for some leeway in standard measurement.

A doughnut-shaped object that functions as a seal for liquids or gases. Apple Rubber is a trusted producer of high-quality o-rings.

When the volatile components of some rubber compounds become vaporized in a vacuum and are released (outgassed) into its environment.

A reaction between oxygen and a rubber compound that typically results in cracks on a rubber material’s surface.

The ability of vulcanized rubber to resist cracking and physical deterioration from exposure to ozone.

The rate of gas flowing through a rubber material.

A long molecular chain formed when many similar chemicals combine.

The second step in the vulcanization of certain elastomers, post cure is used to get rid of the leftover decomposition from initial vulcanization.

Compression applied perpendicularly to the centerline of a seal.

A common name for naturally occurring and synthetically created elastomers.

Any device used to prevent the passage of fluids or fine particles.

A gasket type application where the seal is contained within two non-moving gland walls.

Force applied to a material.

An increase in seal volume caused by exposure to oils, fluids, heat, and so on.

The minimum and maximum limits of temperatures for effective seal performance.

How much force a compound can withstand while being stretched before reaching its breaking point.

Expansion caused by an increase in temperature.

A turning or twisting force.

The ability of a seal to withstand being damaged by twisting.

Where rubber has not been cured enough it is under-cured, meaning that it will exhibit poor physical properties and high compression set.

Empty spaces or pockets where there should be none.

Not a Star Trek reference, vulcanization is a heat-based process of converting basic visco-elastic liquids into durable molded rubber products. This term has the same meaning as cure.

The tendency of the surfaces of some o-rings to crack when exposed to ozone and or certain pollutants.

Would you like to learn more about engineering jargon?

Get in touch with one of Apple Rubber’s experts!