Rubber hits the road: Apple Rubber to attend 18 trade shows through end of 2014 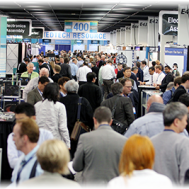 Even in our digital age, in which seamless communication can be initiated between two points on opposite sides of the world at a moment’s notice, the best way to spark a business relationship can still be a handshake, eye contact, and a friendly conversation.

These powerful — and often profitable — encounters are why the Apple Rubber marketing team is slated to attend 18 national and international trade shows through the end of 2014.

“Trade shows are vital to meeting face-to-face with our prospect and customers,” says Lynne Parry, Apple Rubber’s trade show manager.  “We are doing a total of 18 shows this year around the United States, Central America, and Europe…

“We are adding to the mix, doing our tried-and-true, but also adding a few new shows for us in growing industries. Our focus is on the design and engineering of rubber parts, and an Apple Rubber engineer is always available at these shows to help solve attendees’ design issues.” 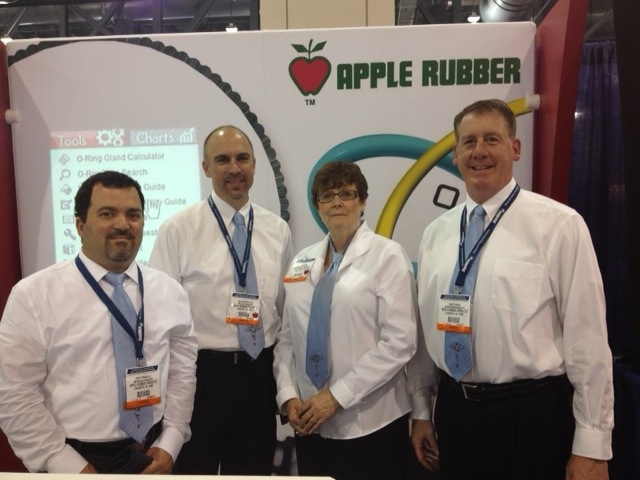 Apple Rubber attended the Marcellus-Utica Midstream Conference and Exhibition in January and the MD&M West Conference in February. The 16 remaining shows that the Apple Rubber team will attend in 2014 include:

The Life Sciences Forum 2014, April 7-9, Intercontinental Hotel (San Jose, Costa Rica). The global orthopedics and cardiology fields, as well as global manufacturing and the viability of virtual reality technology, will be discussed.

MD&M Texas, May 7-8, Fort Worth Convention Center (Fort Worth, Texas). Medical learning labs and introductions to industry innovations and emerging technologies in fields like manufacturing equipment, clean room and sterilization, design services and more make this event a must-attend. Apple Rubber will be in Booth 344.

SEMICON West 2014, July 8-10, Mascone Center (San Francisco, Calif.). According to its website, “SEMICON West puts you in front of every major buyer in the North American market and other leading global companies–IDMs, foundries, fabless, OSATs, OEMS, and more. More than 80 percent of visitors are involved in the buying cycle, and over 70 percent say that what they see at SEMICON West influences their purchasing decisions over the coming year.” Apple Rubber will be at Booth 335.

MD&M Chicago, Oct. 15-16, Schaumburg Convention Center (Schaumburg, Ill.). A return trip to Chicagoland for this two-day conference expected to draw over 6,500 industry professionals. Apple Rubber will be at Booth 1227.

COMPAMED International Trade Fair, Nov. 12-14 (Dusseldorf, Germany).  “Technologies of the future are shown at COMPAMED today,” according to the event website.

Rubber hits the road: Apple Rubber to attend 18 trade shows through end of 2014 was last modified: March 13th, 2014 by dimillo