Understanding the Composition of a Nitrile (Buna-N) Rubber Compound 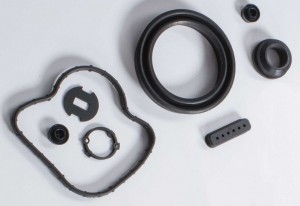 Acrylonitrile Butadiene Rubber (NBR) or Nitrile rubber is one of the most popular compounds for automotive applications. It also is well known as Buna-N. This name came from one of the first base polymers patented in 1934, therefore people commonly use this name for all classes for Nitrile to this day.

Let’s break down the formula.

Polymer selection is based on application. Most standard Nitrile compounds are based on a 33 to 36 ACN polymer.  This gives the most versatile compound performance for oil swell and low temperature properties, figure 1.  In most cases application can perform very well with this range.  Higher ACN polymer are important where seal performance can not compensate for large volume swell and  compound is fully immersed in fuels or oils. This can help in dynamic application where a designer would not want excess compression from higher volume swell as the oil swells the rubber.  Low ACN polymers are used to improve Low Temperature properties especially when designers need to have seals perform down to -60’C.  Seal designers will then need to compensate for the larger volume swell that will be seen. The rubber compound will typically stay more flexible at the lower temperature and allow to seal to respond to the change in pressure.

Speciality polymer can help improve compounds. Carboxylated NBR (XNBR) is the process of adding carboxylic acid groups to the nitrile backbone.  These polymers will give improved tensile strength, tear, modulus and abrasion resistance.  Application for these polymers are rollers, conveyor belts, hose covers, and down hole seals.  The trade off is higher compression set, poor low temperature performance and less heat resistance.  PVC Modified NBR is adding PVC to the NBR backbone.  This improves ozone resistance for application that are exposed to environment but need oil and fuel resistance.  Hydrogenated Nitrile Rubber (HNBR) is the process of saturating the double bonds of the butadiene with hydrogen to give better resistance to oxidation and ozone.  These polymers give superior physical properties, better resistance to ozone and oxidation, and have lower ACN version to give same low temperature performance.

Typically carbon black is used for many standard NBR compounds.  Carbon Black is created from the combustion of oil or natural gas.  The process is controlled to create various particle sizes which gives varying levels of reinforcing properties in a rubber compound.  Lower particle (N110, N330) give higher level of reinforcement to the polymer, thus providing higher physical properties.  Trade off is typically give higher compression set for seal application.  Larger particle (N990) gives lower physical properties, but better compression set. Typical NBR compounds use a combination of N550 and N774.  Altering the different amount of carbon black will change the Shore Hardness or durometer of the final compound. White fillers can be used for compounds that need to be colored or in some cases improve the abrasion resistance of a compound like adding silica to a compound.  Some non-black fillers are calcium carbonate, clay, silica, talc and mica. Each one of these fillers have different level of reinforcements and like carbon black have different particle sizes and structure.

Plasticizers are used to help the processability of the final compound. They also aid in the mixing of the compound to incorporate all the ingredients in the formulation.  Plasticizers can modify the physical properties of the final compound.  Some changes in physical properties are lower hardness, improved flex and low temperature performance, changing swell tendency and flame or antistatic resistance.  Plasticizers are often characterized by the polarity of the oil.  Picking the correct polarity is important with NBR because higher ACN are higher polarity and can cause oils to bleed out. Some families of plasticizers are aromatic esters, tricarboxylic esters, polymeric plasticizers, polyglycol diesters, and aromatic triesters.

Phthalates are commonly used in NBR compound to give improved low temperature performance and where cost effective. Di(2-ethylhexyl) phthalate (DEHP) was very commonly used before many of the regulations that restrict the use of Low Molecular Weight Phthalates. These types of phthalates are believed to extract easier and can cause reproductive issues. DEHP was more widely used in PVC plastic parts that came into contact with baby products. As an oil seal, there was not much concern. Many supplier now have moved away from using phthalates or switched to High Molecular Weight to prevent any issues with future regulations.

Antioxidant are needed in NBR compound to prevent degradation of the unsaturated polymer backbone caused by high temperatures.  It is also important that the correct antioxidant is used so it is not extracted out of the compound by oils and fuels found in the application. Amines and phenolic antioxidants help scavenge up free radicals that can cause polymer chains to break.  This can caused increase cross linking and making the compound harden and crack.

Antiozonant are used create a barrier to protect the polymer chain.  Waxes are used to bloom out and create a barrier around the molded part.  This is the same as wax found on a new car tire.  Phenols and aryl amines are use to again scavenge free radicals.

Metal oxide and fatty acid combination is used to accelerate the sulfur used to cure the NBR compound. In recent years there has been more concerns with the use of heavy metal oxide due to the effect on the environment. Studies are underway to use alternatives such as Magnesium Oxide as a non heavy metal oxide that promotes the breakdown of accelerators used in the curing process.

In sulfur cure systems, accelerator are used to speed the reaction rate of the sulfur.  Sulfenamides are the most common primary accelerator.  Secondary accelerators like thiurams and dithiocarbamates are used at low levels to act as a “kicker”. Changing the levels of accelerators can improve compression set and speed the cure process so molded parts take less time in the mold.  It is always the concern that the scorch time (time the rubber compound begins to cure) is not reduced so much that the operator cannot load the rubber charge into the mold fast enough to prevent defects. Many seal compounds have low sulfur, but higher level of sulfur donor accelerators to improve compression set.

Co-Agents are used with peroxides in the curing process.  This helps activate the peroxide for higher cure efficiency and faster vulcanization rates. Some Co-Agents also offer retarding effect to improve scorch safety.

Typical cure for standard Nitrile compounds is sulfur. With the combination of accelerators service temperatures of 125 to 135’C can be reached.  Peroxide curing provides higher service temperature which can handle temperatures to 150’C for short durations.  The drawback is these compound have very short shelf life in the raw state.  Also have much higher cost and are harder to mold.

Erucamide or oleamide are naturally derived fatty acids that bloom to the surface of a molded NBR compound to help reduce friction and give lubrication.  Graphite or moly disulfide can be added as a lubricant to compounds, just assure your application can handle particulate coming off the compound.  PTFE power can also be mixed into the raw compound to give lower friction and better abrasion resistance to final molded products.

Have questions or comments about our compounds? Contact our engineers for assistance.