The Importance of Oring Lubrication

Many sealing situations call for the minimization of frictional forces created by a seal. One method of minimizing oring friction is to introduce a lubricant. This lubricant can be of three general types:

Internal Lubricant:
A lubricating agent is mixed into the elastomer before molding. This lubricant is dispersed evenly throughout the rubber before vulcanization and lowers the coefficient of friction of not only the surface, but the entire rubber part. An example of an internal lubricant that is commonly added to elastomers is Teflon™.

Temporary External Lubricant:
A lubricating agent, generally a liquid, is applied to the surface of a molded part. This lubricant generally sits on the surface of the seal, and as such it can be removed by particular fluids or solvents. Temporary external lubricants can greatly reduce abrasion, pinching, and cutting during installation and assembly. An added benefit of temporary external lubricants is that they can act as a barrier between harmful system chemicals and the elastomer, increasing its useful service life. An example of a commonly used temporary external lubricant is petrolatum. It should be noted to that compatibility testing should be conducted before the use of a particular lubricant.  Some lubricants can swell the rubber seal material and degrade its physical properties.  An example of this chemical incompatibility is silicone lubricating oil swelling a silicone seal.

Semi-Permanent Lubricant Coatings:
Some applications may require a lubricant, but temporary lubricant greases would contaminate the assembly. For these applications different types of coatings are available that can provide good lubrication to seals without the contamination issues associated with temporary external lubricants. The term semi-permanent is used because these coatings can peel and flake over time, so they are not totally permanent. Two common semi-permanent lubricants are parylene coating and Teflon™ coating.

Comparison:
Below is a plot of insertion and actuation force for AS568-010 orings made from a standard 75 durometer fluorocarbon that has been treated with some common lubricants and inserted into an Aerospace Recommended Practice (ARP)-1233 standard oring groove and bore to show the relative decrease in forces exhibited by the lubricants.

Notes:
Standard 75 Durometer Fluorocarbon is a Viton A
75 Durometer fluorocarbon plus 8% Teflon™ mixed into the compound
P-80® is a temporary assembly lubricant 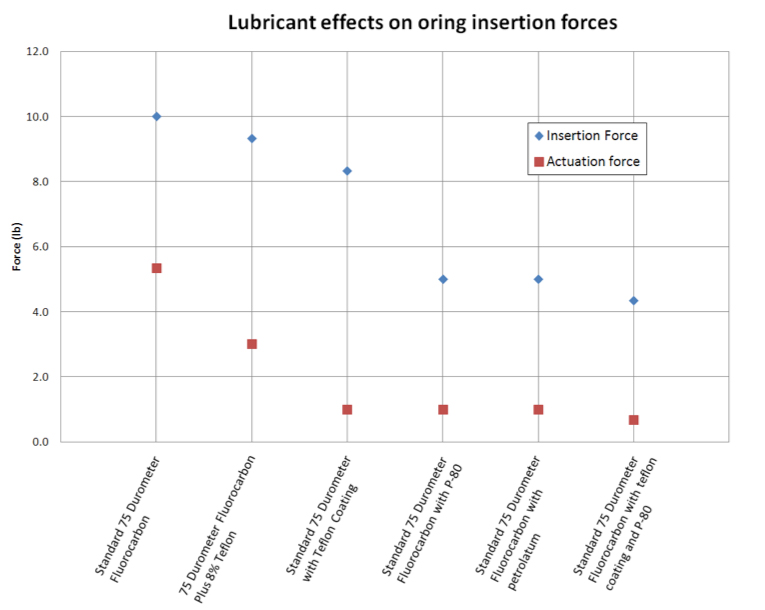 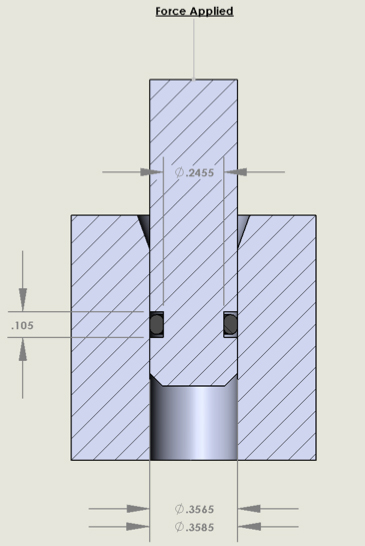 The Importance of Oring Lubrication was last modified: March 18th, 2013 by Dave Meehan