How an O-Ring Works 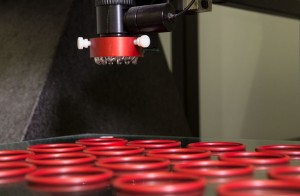 The o-ring is one of the simplest, most common types of seal for a wide range of static and dynamic applications. The design of the o-ring groove is relatively straightforward — by following well-developed rules for groove geometry, an economical and reliable seal is obtained. The tendency of the o-ring to return to its original shape when the cross-section is compressed is one of the major reasons an o-ring makes an excellent seal.

How do you use an o-ring?

Simply put, an o-ring seal is comprised of an elastomeric circular cross-section into a designed o-ring groove, providing an initial compression.

The force required to compress an o-ring is a result of the durometer and cross-section diameter. O-Ring stretch affects the seal compression by reducing the cross-section, which reduces the sealing potential of the o-ring.

At zero or very low pressure, the natural resiliency of the rubber compound provides the seal. Seal performance may be improved by increasing the diametrical squeeze. This increase in squeeze can have adverse effects in higher-pressure dynamic sealing applications.

The diametrical squeeze provides a frictional force between the o-ring and the groove that holds it in the installed position. Engineered to deform, the rubber compound flows up to the extrusion gap, completely sealing it against leakage, until the pressure applied is sufficient enough to overcome the frictional forces and deform the o-ring into the small extrusion gap (assuming the rubber has reached its limit of flow under pressure, further increase of force will result in failure by shear or extrusion).

The groove is designed to provide an initial force on the seal across one axis in the range of 7-30 percent. This compressive force is usually perpendicular to the force being applied, resulting in free volume in the groove on the other axis.

What does an o-ring do?

When pressure is applied, the o-ring will move toward the low-pressure side of the groove. The sealing pressure is transmitted to the surface to be sealed, which is actually higher than the applied fluid pressure by the amount equal to the initial interference pressure.

Increasing the applied pressure creates interference stress between the seal and the mating surfaces. While this situation remains, the o-ring will continue to function normally and reliably up to several hundred pounds of force, assuming the o-ring selected is the correct size and the groove is machined to the proper size.

With increasing pressure, ring deformation will be exaggerated, ultimately extruding a section of the ring into the extrusion gap. If the extrusion gap is too large, the seal will fail after it is completely extruded from the high pressure.

Upon release of the pressure, the resiliency of the rubber compound results in an o-ring returning to its natural shape, ready for similar cycles.

These materials, at their normal operating temperature, are virtually impossible to compress and have a very low elastic modulus. You can change their shape (but not their volume) and the applied diametrical squeeze will cause an increase in the length of the seal across the groove.

This increase will be even greater as a result of the expansion of rubber due to heat from the fluid being sealed and the compatibility of the materials. The groove must be properly sized to allow for the maximum expansion of the rubber compound, otherwise, the assembly will develop very high stresses.

When enough force is applied, the o-ring will move toward the low-pressure side until it contacts the side of the groove. Additional pressure or force will deform the o-ring toward the extrusion gap. The o-ring will initially deform into a “D” shape. This deformation will increase the surface contact area 70-80 percent of the initial cross-section. The surface contact area of an o-ring under high pressure is roughly twice that of the original geometry at zero pressure. 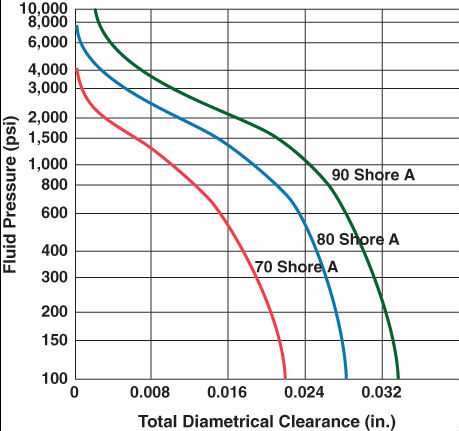 The possibility of seal extrusion is not limited to dynamic applications.

In a static axial application, stretching of assembly bolts under high pressure can open the extrusion gap enough to allow leakage.

Internal pressure limits are determined by the clearance gap and the o-ring hardness (some data is given in the figure above). In practice, the gap is normally specified for a given ring size and application. If operating at low temperatures, it may be necessary to reduce the gland depth to compensate for the contraction of the ring and provide the required squeeze at the contracted size.

At the other end of the temperature scale, it may be advisable to increase the groove depth slightly to avoid excessively squeezing the ring at working temperatures. This effect can be significant at extreme temperatures because the coefficient of thermal expansion of elastomers is higher than that of metals.

Below is an initial deformation of an o-ring in a groove o-ring. From what we can see, it appears that the o-ring is experiencing system pressure. 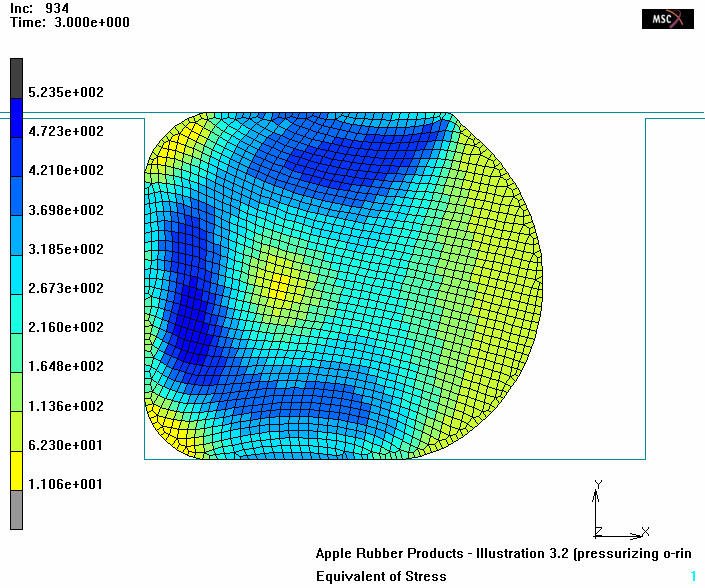 How an O-Ring Works was last modified: February 28th, 2019 by Joe Divissich