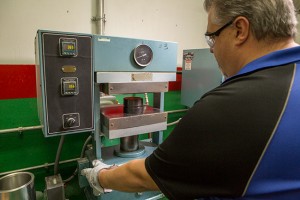 If there is room for improvement in a process, it’s likely that the engineering experts at Apple Rubber are already aware and making changes. Here’s how we worked to prevent valve failure on your plant floor.

Properties of the Nitrile rubber compound could be improved on for a better propane service seal.

Apple Rubber has the ability to customize rubber compounds to help improve the performance of a rubber material for specific applications. In this case, our customer was redesigning a new propane valve. We used a special plasticizer to improve the dry-out performance of a rubber seal after it was exposed to propane. This happened during a testing of the performance of the valve, when the seal components where exposed to propane and then allowed to dry out. It was noticed that the dimensions of the seal where getting smaller. This was causing a shift in the tolerance stack-up of the seals, which could allow the valve to fail. The customer sent exposed nitrile seals back to us for evaluation. We did measure a noticeable shrinkage in the dimensions from unused parts to exposed parts.

Our lab is equipped with a Thermogravimetric Analyzer (TGA), a testing device that allows us to look at the compound breakdown by major components that burn off at different temperatures. As the furnace heats up, the system measures weight loss. This gives a quick sketch of the ingredients found in a rubber compound. Oils and processing aids typically burn off first, followed by polymers, and then oxygen gas, the carbon black. Mineral fillers are usually leftover. It was noticed that after heating this product, most of the plasticizer was missing. Typically nitrile compounds use low molecular weight (LMW) phthalates which help the low-temperature performance of these compounds.

It was concluded that the propane was extracting out the phthalate. Also, n-hexane is used as the testing fluid for UL-157, which is the testing procedure to get a rubber compound certified under Underwriters Laboratory JMLU2 Gaskets and Seals – Components. It was found that testing with this fluid duplicated what was found in the actual propane testing. The rubber seal would swell slightly with exposure to the fluid. After the fluid was allowed to sit un-exposed, the seal would shrink. We believed that the fluids replaced the LMW phthalate because these fluids are more volatile. This caused the volume swell testing not to show any problems. There was a very low swell percentage calculated with standard testing.

The fluids would then evaporate out, which then caused the low mass. This happened in the period after 72 hours up to 168 hours.

Our solutions were to modify the compound to replace the LMW phthalate with a new polymeric- type plasticizer. Our Material Development department was able to compound, mix and test this new compound. Using prototype tooling, we molded the parts to be functionally tested by our customer. Additionally, we sent test labs to UL to have the compound listed for propane and MFG gas service.

We’re always looking into new ways to improve our manufacturing processes and enhance product performance. Connect with us on Twitter or LinkedIn, or contact us online to see how Apple Rubber can help you.