A Comparison of Actuation Forces: Material and Hardness

Compressive testing is often conducted to determine a material’s strength and ability to resist external forces. The normal force squeezing the rubber material is what creates a reliable sealing element. To determine these values, AS568-010 o-rings were inserted into an Aerospace Recommended Practice (ARP) -1233 standard o-ring groove and bore to compare the relative forces.

Dynamic Force: the average force an o-ring exerts back while being pushed down upon.

Apple Rubber has a helpful feature on our website, The Gland Calculator, which we use to evaluate these forces. It’s a useful tool we developed to help our customers determine the squeeze, stretch, and volume fill of an o-ring during a compression. 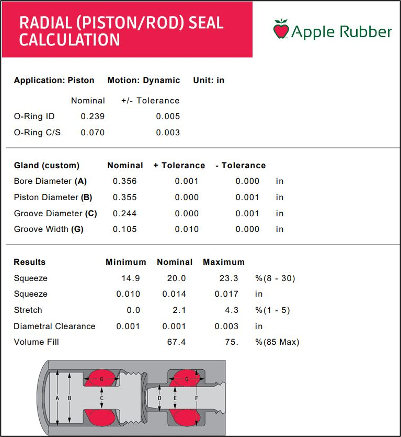 The calculator allows you to input the size of your o-ring, whether it’s a standard or custom size. Above is an example of the gland calculator assessing the AS568-010 o-ring that was used during our tests.

Here at Apple Rubber, we offer six standard rubber materials in a range of durometers (hardnesses) to fulfill practically any service requirement.

The materials we included in our test were:

The relative results are as follows: 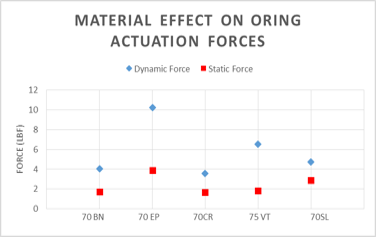 Based on existing data, we expected to see similar results between 70 BN, 70 EP, and 70 CR. However, 70 EP turned out to have higher static/dynamic force values. This could be a result of the o-rings being on the upper end of dimensional tolerances. 75 VT readings were a bit higher due to the 5 point greater durometer. Silicone (70 SL) tends to have a higher coefficient of friction, and for this reason the force readings were greater.

Durometer (hardness) is the relative resistance of the surface of a rubber sample to indentation using the Shore-A durometer scale. The hardness of a material is important to identify so that the seal component is able to satisfy the specific purpose in the application.

Using the same method of testing, we used the material Nitrile (Buna-N) with differing durometers for our next test.

The durometers that were included in the test were:

The results are as follows: 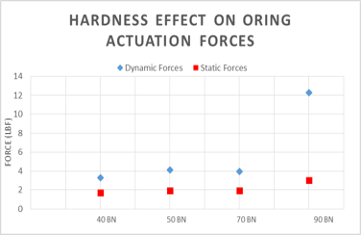 Many sealing applications call for the minimization of the frictional forces created by a seal. One method of minimizing o-ring friction is to introduce a lubricant. In this test, P-80®, a temporary assembly lubricant, was applied to the different materials and durometer o-rings to compare their static and dynamic forces. 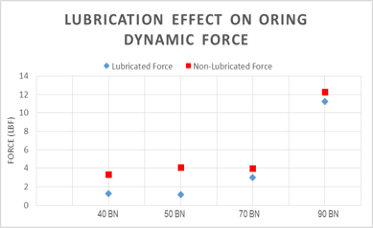 Based on the data, it can be concluded that introducing a lubricant will decrease the insertion and actuation forces based on the hardness of the material, minimizing the frictional forces created by the seal. 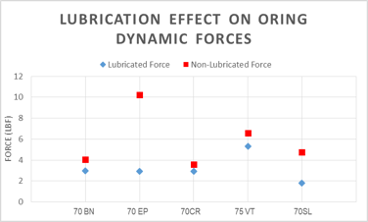 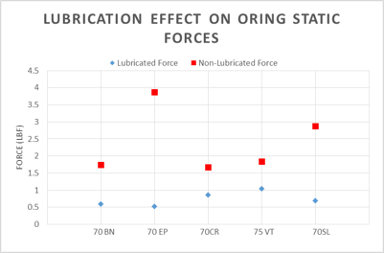 Based on these results, it can be concluded that introducing a lubricant will decrease both the static and dynamic forces based on the material used, minimizing the frictional forces created by a seal.

Apple Rubber is happy to meet our customers’ unique requirements when making a custom product. Contact one of our engineers today to learn more about how we can help with your next project.

A Comparison of Actuation Forces: Material and Hardness was last modified: September 7th, 2022 by Grace Kulniszewski