O-Rings in Space: The History of the International Space Station 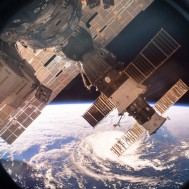 O-Rings have played an important role throughout the history of space exploration. Used in engines, motors, fuel systems, and electrical equipment, and to maintain the pressure of the cabin, o-rings carry a lot of responsibility in the success of space operations.

In fact, o-ring failure was the cause of the Space Shuttle Challenger disaster in 1986. In this instance, poor material selection played a critical role in seal failure. The rubber chosen was not designed to withstand extremely low temperatures. Because of this, the o-ring in question stiffened and failed to seal the joint of a fuel segment, causing an explosion.

After the disaster, engineers fully realized the importance of o-ring success in critical applications. Every o-ring chosen for aerospace applications must be able to withstand incredible stress and extreme temperatures. Strict quality specifications have been placed on o-ring manufacturers, including the AS9100 certification. Apple Rubber is AS9100 certified, meaning that we possess an aerospace quality system that is both consistent and robust, ensuring product, process, and service safety, reliability, and quality.

With new requirements set in place, o-rings have continued to play a critical role in space exploration—including the development of the International Space Station (ISS). Apple Rubber is proud to have manufactured and engineered aerospace products used in a number of working parts employed on the ISS.

Let’s take a closer look at the history of the ISS.

The Rise of the International Space Station

The ISS began its decade-long assembly in 1998. Since its initial development, there have been over 30 missions, five space agencies, and 15 countries involved in engineering the various working parts. The ISS measures roughly the size of a football field, weighing 460 tons and orbiting 250 miles above Earth. Every 90 minutes, the ISS circles the Earth completely at about 17,500 mph.

On November 20th, 1998, a Russian proton rocket launched as the first segment of the ISS. Less than a month later, the first US-built components of the ISS were launched. Over the next 10 years, a number of shuttles (including the first astronauts)  launched to join the ISS:

During the first 10 years of the ISS formation, 202 people visited the station. Since then, the ISS has continued to serve as a platform for long-term research on human health, biological experiments, and commercial product testing. This research and development is a key stepping stone  on the path to further human exploration of the solar system.

Want to talk more about the International Space Station?

O-Rings in Space: The History of the International Space Station was last modified: August 31st, 2021 by applerubber