How Baby Boomers and Millennials Can Work Together: What You Need to Know 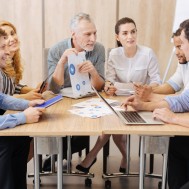 Getting different generations to work together has always been a challenge. When it comes to baby boomers and millennials, though, the test can be even harder. Now that these groups combined make up more than 63 percent of the manufacturing workforce, though, one fact remains certain: the relationship between the two should be one of our field’s primary concerns.

When it comes to the manufacturing industry, cohesiveness is everything. That’s why it’s so important to ensure a cohesive environment. This is done through relationship building.

Not sure how to do that? That’s why we’re here. We’re breaking down everything you need to know about how baby boomers and millennials can work together.

Who are Baby Boomers?

Baby boomers — those born between 1946 and 1964 — are currently approaching the later stages of their life. In this way, it’s likely that the majority of business owners can identify within this demographic.

This group is known to reject traditionalism. This is a function of post-war America, much less improved education, technology and cultural trends. However, for as much as traditionalism was rejected, work-centric and conservative attitudes quickly became representative of this group. Not only are baby boomers ingrained with a sense of competitiveness, but they also consistently strive for measurable success. Which, of course, is good for business.

Born between 1981 and 1997, millennials are, for the most part, just hitting their adult stride in life. The majority of new hires within the manufacturing industry can identify within this demographic. Much like baby boomers, however, these individuals reject traditional values. Notably, though, this isn’t necessarily because of improved education, technology and cultural trends.

Rather, it’s through an understanding that all of these factors have to continue to improve. That said, many millennials share a work-centric attitude within a similar vein as baby boomers. The primary difference, however, is that this cohort’s focus on work isn’t as structured. This doesn’t mean that a sense of competitiveness or strive for measurable success isn’t engrained. It really just means that the two demographic cohorts are more similar than either would like to admit.

How Baby Boomers and Millennials Can Work Together

The maintained convergence of baby boomer and millennial workplace habits, much less attitudes, can help you and your business reach optimized outcomes. But with their individualized characteristics in mind, how can such a convergence exist?

Most millennial employees will have little-to-no experience working directly with individuals who identify as baby boomers. And most baby boomer owners won’t hold tangible experience with millennials. That said, it’s important to go beyond the analysis of these demographics and their characteristics. The following are a few ways baby boomers and millennials can facilitate a working relationship with each other.

Every business is different. In fact, businesses change as a result of day-to-day activity. The business a baby boomer is a working member of now more than likely holds a different essence than it did around the time it began, much less around the time a millennial employee first started. In this way, it’s important to not only analyze what made a company, but what will continue its development. It can be a lot of information, but it’s information that will help people of all generations interact in effective ways.

When analyzing company culture, however, it is important to stay objective. There isn’t benefit in biased findings, much less preconceived notions. Instead, there exists a great deal of significance in the function of actually learning. This acts as a reminder to not only serve a business and its goals, but an individual within either demographic cohort in focus throughout their every encounter. That said, it isn’t easy. But staying committed to helping your business, well, commit will help everyone involved.

Company culture should be a focus of yours, regardless of your place in the business itself. It’s a variable that should be viewed with an undying focus, especially given the likelihood it’ll change during your tenure there. Much less, tomorrow.

For baby boomers and millennials alike, perception is everything. This sense of interpretation, however, is often limited by lessened encounters or even, unfortunately, no encounters at all. However, there shouldn’t exist a sense of separation within any functional business. Rather, there should be in place a common standing, a sense of interconnectivity that implies not only understanding, but validation.

Goals can be hard to quantify, much less make tangible. But especially within the context of manufacturing, goals apply to individuals as much as they do to the manufacturing team as a collective. Not only is it important to understand what exactly goals are, what they can be, it’s also important to recognize the difference between those of an individual and those of a company.

At times, the distinction could be difficult to comprehend. But this process starts with actual communication. Of course, there exists opportune and inopportune times to do so. However, the fact of the matter holds true: understanding your peers, much less those above and below you, grounds everyone’s own sense of humanity. Which, by nature, is what keeps the majority of individuals within these cohorts motivated and effective.

Baby boomers and millennials are most similar in the way both cohorts value individualism and growth. This could be a problem, though, when the personal-philosophies of both clash. This is especially true when the root of tension is, in fact, through the act of simply wanting the best for not only the business they are a part of, but also for their fellow worker.

Through this, it’s important to come to terms with how destructive micromanagement can be, especially within the context of manufacturing. The innate function of micromanagement exists somewhere between a belief that one is more skilled than another and a realization that a business could be running better. Either of these senses could be used constructively, albeit individually. When applied together, however, growth of not only the business, but also the individuals that make it up, can be stunted. Or even worse: destroyed.

The culmination of the previous three ways baby boomers and millennials can work together facilitates arguably the most important function of any efficient workplace environment: the promotion of balance between an individual’s life inside and outside the company. This is as important for the functionality of an individual business and its objectives as it is for the individual and his or her objectives.

But it’s a lot easier said than done. In either setting, a person, whether they are a baby boomer of millennial, can have their focus shifted to the point where he or she effectively ignores the other. This is obviously a negative. But so is the root of the problem: a lack of balance in the first place. In this way, the encouragement of flexible work hours or even the adoption of workplace discussions can serve both business and individual alike. And in turn, this positively affects the relationship between all people, especially those who value decisive balance the most: baby boomers and millennials.

Without a sense of fulfillment in either, both baby boomers and millennials can feel a sense of defeat. But without a sense of fulfillment in both, individuals within either demographic cohort could end up defeating those around them, even unknowingly. That makes the promotion of life/work balance an essential addition to any managerial team, much less those that are made up of the baby boomer and millennial combination.

How is your business facilitating the relationship between baby boomers and millennials? Share your stories with us on Twitter at @AppleRubber.

How Baby Boomers and Millennials Can Work Together: What You Need to Know was last modified: November 3rd, 2017 by applerubber