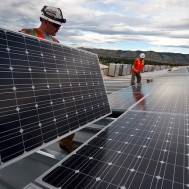 Once characterized by our dependency as a consumer, the American role in the international energy market is set to shift in the coming years. Especially for sources of renewable energy such as wind and solar, the U.S. is predicted to become more active in our demand for and production of clean energy. Solar in particular is on the rise internationally, with the global market having grown by 26 percent in 2017.

Once viewed as an extreme specialty item in the States, solar panels are becoming more of a mainstream product. Public perception of solar installations continues to evolve towards seeing them as attainable. The International Energy Agency published a World Energy Outlook report that stated how clean energy resources would continue to become less expensive over the next 25 years, threatening traditional sources of power, most notably, fossil fuels.

Solar panels are on the rise for a number of reasons. Here are 4 big trends in America’s solar power industry:

In the World Energy Outlook, it was reported that the costs associated with going solar decreased by a whopping 70 percent, in a period examined from 2010 to 2016. It should come as no surprise then, that along with lowered costs and therefore increased attainability, that solar has begun to permeate the residential sector.

Many American homeowners are turning to solar panels as a means to power their homes sustainably, and also to lower the amount of money paid to electric utility companies. The value in going solar, for residents, lies in an environmentally-friendly way to power their homes, and an option for saving money in the long run. It is becoming increasingly common to come across solar panels powering a home in a suburban development.

Solar-powered homes typically rely on something known as net metering to lower the cost of utility bills. Net metering refers to how credits are accumulated by the excess power generated from solar power homes. The excess energy produced by the solar panels is actually distributed into the electrical grid, so neighbors that do not have panels actually end up using solar energy. However, the house with the panels is accounted for, with the credits of electricity generated via solar being subtracted from their electric bill.

An array of panels installed on the roof remains to be the traditional image associated with going solar. But if you think your home or your location can’t possibly be practical enough to go solar, think again: a Google blog says that roughly 80 percent of roofs in the United States are “sunny enough” to support going solar.

The increase in quantity of solar installations, in the residential sector especially, has resulted in modifications to the traditional design and installation process of panels. For example, consumers who do not have ideal roof space or condition for an installation have the option with many companies to instead go with groundmounts, or panels mounted on the ground.

In terms of aesthetic, some customers want their solar panels to add to the design of their yard and landscaping.. Hence, solar pergolas have become a popular option, an equal mix of design and function. But of course, Tesla’s creation of its sleek Tesla Tiles, which are remarkably more modern looking than regular roof shingles, is also keeping the solar industry on its toes in terms of design.

A new tariff on imported solar panels was implemented in the New Year. Many consumers assumed that a raise in pricing on imported panels, which many US distributors rely on, would affect solar’s affordability for a working-class household. Furthermore, environmentalists believe that by financially tarnishing the solar industry, the policy was essentially incentivizing nonrenewable forms of energy, as in fossil fuels like gas and coal.

However, many American producers and distributors of solar panels believe that the policy will work in the long run to make the American solar industry more competitive against other countries. A tariff like this will encourage more domestic production of panels, creating more jobs in the American solar industry, and driving down production costs for local companies. Chinese manufacturer JinkoSolar is in the process of constructing a new plant in Jacksonville, Florida, which is said to potentially employ over 200 workers.

Locally-owned solar companies are reassuring their customers that despite the bad press this tariff has given the solar industry, the price of importing solar panels does not have as large of an effect on the overall installation price as one would think – in fact it’s only about 25 percent of the price.

Once considered a supplementary material to a solar array, photovoltaic trackers are now being re- examined as a completely worthwhile investment to most solar systems. In fact, PV trackers are forecasted to be the fastest growing solar racking product in the market through the year 2022.

Photovoltaic is the word that describes how the cells on individual solar panels are able to convert the rays from the sun into usable energy. Tracking technology works to optimize the amount of sunlight that solar panels take in, and therefore how much energy is able to be produced.

Trackers are digitized, so they direct your panels on which direction to move in to essentially follow the sun. There are options for types of trackers: single-axis trackers only move the panels between north and south, where dual-axis trackers move panels north-south-east-west. The angle at which the panel is operating at determines the amount of solar energy that will be converted into electrical power.

What are some other trends on the rise in the American solar industry? Tweet us @AppleRubber.