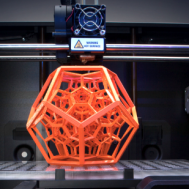 Shane Taylor of 3D Printing Industry gives the following perspective on adapting to these technologies:

“It’s the same way electric cars disrupts the network for gasoline cars,” says Andrew Rich, Apple Rubber project engineer. “Disruptive innovation replaces old technologies by destroying or coexisting with what was there before rather than evolving from it. Either way, it’s opening a lot of doors in manufacturing.”

Let’s delve into the benefits, limitations and trends of the 3D printing industry.

The benefits of 3D Printing

“Inventors now have everything they need,” says Rich. “People can now design on their own home computer and print it out—not pay thousands of dollars to have larger companies make prototypes. Manufacturers may end up touching it in the production phase, but not early on. 3D printing is bringing innovation to the general public.”

Although this may present some challenges for manufacturers, it presents equal opportunities, as well.

“Now we’re seeing companies who only work in 3D printing—companies who may have previously been involved in tool manufacturing or the output of high quantities of product,” notes Rich. “Now, 3D printing is their only focus.”

Rich predicts that in the near future, convenience will be a huge factor. Consumers will have the ability to go online, purchase schematics for a toy and print it all from within their homes.

“Right now, 3D printing allows customers to have prototypes built within a single day rather than a few weeks,” Rich notes. “The speed allows the customer to have something physical to interact with before final production.”

3D printing allows prototypes to be made faster, but not all materials can easily equate to what customers need. Products are often made to represent parts, but do not necessarily act as the final part.

“Customers can easily have a rubber-like part printed, but it may not be practical to use in the final application,” Rich notes. “There are many chemicals and applications that our parts are exposed to, that 3D printed materials can’t handle right now.”

Because of the chemical makeup of parts, several material limitations exist—like stress relaxation and compression set—that do not equate to materials that rubber companies use today. 3D tolerances, for example, are two to three times higher than what Apple Rubber currently has to hold for the majority of parts.

“If a consumer needs a unique custom part to fit a specific application, we could print and get a very close match of the part,” Rich says. “But as far as stress relaxation, compression set and tight tolerances, it just wouldn’t be able to meet requirements.”

Despite the opportunities of 3D printing, it may be some time before Apple Rubber adapts to the process.

“Our main goal is prototyping and getting a part into the customer’s hands as quick as possible,” Rich notes, “and we can already do that right now. We can make thousands of parts at a time for a couple pennies each. Until the capabilities increase and the price to produce a 3D printed part falls, it won’t be a competitive manufacturing method.”

3D printing allows prototypes to be made quickly and efficiently while producing a comparable material for the customer. But when compared to Apple Rubber’s processes, it may not be the ideal solution.

“We produce custom parts for specific applications,” notes Rich. “This is very different from a company who mass produces rapid prototypes for one brand.”

3D printing can, however, greatly influence the mold-making, industry. As the industry is starting to print with metals and hard materials, making the initial mold for these parts may be the way to go.

“This would speed up the lead time by allowing us to make molds quicker,” says Rich. “But a limitation exists in the 3D materials and process: Our molds must endure 350 degrees at 10,000 PSI for six minutes. Printed materials cannot handle the combination of heat and pressure, so it would certainly require further research.”

Looking to Apple Rubber’s near future, Rich believes it all comes down to quality of the product. There are limited applications for the technology in the rubber industry as of right now, but that can change with future innovations within the 3D printing world.

“As new technology adapts quicker and quicker into our lives, this will certainly become more common,” he notes. “Today we are keeping an eye on the technology and looking to see how it can become part of Apple Rubber’s future.”

Do you have any thoughts, ideas or comments on 3D printing in manufacturing? We’d love to hear them on Twitter @AppleRubber.