Why Making Slime is like Being a Polymer Chemist 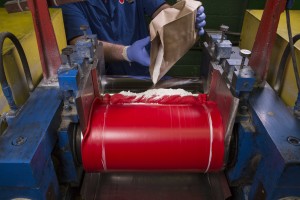 I never realized that getting my Chemical Engineering degree would lead me to become a slime maker. Through my career as a Polymer Chemist, I have developed many different rubber compounds of various colors, polymers, and hardness. As there are many variations of rubber compounds, there are also many ways to make slime. Watching my daughter learn the various methods of slime production helped me remember my early days of learning how to make a rubber compound.

Slime can be made in a variety of ways, but the major component is always glue. Elmer’s Glue® is a child favorite and one that I recommend. The rubber polymer in most glue is Poly(vinyl acetate), PVA. This polymer allows the slime to stretch and recover. Other non-glue bases include guar gum, large marshmallow and other long-chain starches.

While there are numerous variations of slime, there are also many different kinds of rubber compounds. The rubber base polymer is key to the properties of rubber. Natural rubber compounds, which are used to make automotive tires, come from a rubber tree. The tree’s extract is turned into a rubber base polymer. With the addition of fillers, protectants and curatives, the rubber compound is created. Changing these additives give different desired physical properties. Also, changing the base polymer can help give better chemical resistance or better functional properties. Silicone, FKM, EPDM and NBR base polymers are used for specific functions. For example, Silicone is used for extreme temperature, EPDM is used for weather seals, FKM is used for its high temperature and chemical resistance and NBR is used for fuel and oil compatibility. All of these base polymers still need fillers, protectants and curatives to make them a functional rubber compound.

An activator is used in slime to chemically cross-link the polymer chains together. This gives elasticity and viscosity. You can think of chemically cross-linking as working with a Rainbow Loop®, or small rubber bands chained together to form a larger band. The more chains, the longer the band. Looking at slime and rubber, the more cross-linking, the stiffer the compound or higher the viscosity. Some commonly used activators are laundry soap, Borax® and contact solution with baking soda.

Rubber activators include sulfur, sulfur donor chemicals, organic peroxides and metal oxides. The most common system of rubber activators is sulfur with sulfur donor systems. These systems add a sulfur element, bonding the carbon chains of the polymer. These typically are used for lower service operating temperatures. Organic peroxides bond the polymer directly, forming a carbon to carbon bond. Usually, these are stronger and can handle higher heat. These bonds are essential and need to be used in rubber compounds to make the rubber vulcanize.

Like slime, rubber compounds can also be pigmented depending on the filler used. Carbon black is a common filler used in black rubber compounds and is essentially varied sizes of carbon soot. This gives different hardness and tensile strengths to the rubber. White fillers such as clay or silicon are also used for pigmentation of the compound. Waxes can be added to help protect the rubber from ozone, which is seen on new tires. Lubricants are used to bloom to the surface to make the rubber slippery.

After many years in the rubber industry, it is always good to get back to your child roots and use your knowledge in a fun and creative way, like making slime with your kids. Polymer, activator and fillers are essential components for both slime and rubber compounds. Varying these will change the properties of both to the desired outcome. As seen with rubber, there are new products being introduced to improve all three major components. This is beneficial to the medical, chemical and automotive industries. As for slime, there are different materials that can be used to replace Elmer’s Glue® that will make the slime less toxic. Also, new colors can be made with different activators, including glow in the dark options. The rubber industry can always use more rubber chemists, so we recommend letting your children keep experimenting with slime. Hopefully, we can promote more children down the road to future STEM education and careers. Many high paying jobs can be found in the rubber industry, and there are numerous opportunities for the industry to grow and evolve. For example, new advances in renewable sources for polymers and reclaiming for vulcanized compounds will lead us to a more sustainable future. Advances in rubber manufacturing with the use of robotics could lead to safer and ergonomic environments for employees. All of these possibilities could lead to exciting employment opportunities.

Thank you Mea for the help with this article.

Why Making Slime is like Being a Polymer Chemist was last modified: October 22nd, 2018 by John Tranquilli