1). TOC can be a source of food for bacteria. The lower the TOC level in a system, the less food will be available to sustain bacteria.

2). TOC is one of the core indicators used to gauge the overall health of the water purification system. High TOC levels can point to clogged or malfunctioning filtration equipment or other possible contamination within the system.

Both these factors illustrate that TOC should be monitored and kept to a minimum in a purified water system.

Several standards are available for monitoring the maximum accepted level of TOC in water systems. The U.S. Pharmacopeial Convention (USP) water for injection limit is 500 parts per billion (ppb). ASTM D1193 type I and type II waters have a limit of 50 ppb.

Below is a picture of the Apple Rubber purified water continuous TOC monitor. It is capable of displaying TOC levels for different intervals, including a 24-hour period. Typical levels are single digits (ppb). 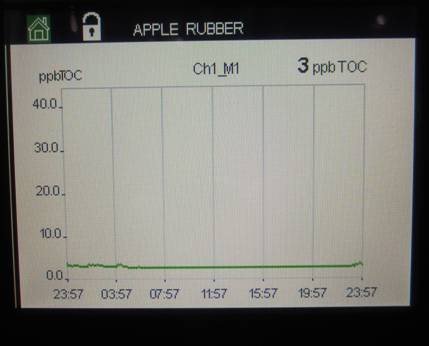 The electrical resistivity of purified water can be a general gauge of its overall purity. This is because most common water impurities ionize.

Generally, electricity flows more easily through contaminated water. Conversely, pure water does not contain these contaminant ions, so it is more difficult for electricity to flow.

Several standards exist to measure the electrical resistivity of purified water. The USP water for injection has a minimum resistivity of 0.77 MΩ cm. 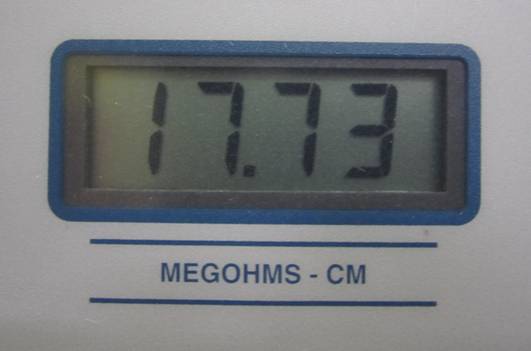 Many techniques are available to either kill bacteria in water or render them unable to reproduce. Regardless, after bacteria are killed, their carcasses still remain. Certain bacterial carcasses contain lipopolysaccharides (LPS), which are released after they die.

A component of this LPS, called Lipid A, is what causes an adverse response in humans. Lipid A is referred to as a pyrogen because it can cause a rise in body temperature if they are injected into the human body.

It is believed that pyrogens could become attached to medical parts during cleaning if they are present in the wash water. The pyrogens could then detach from the medical devices during use and enter the human body, where they would cause a fever in the patient.

Because of their deleterious effect on patient health, it is important to reduce pyrogen levels in wash water to limit possible contamination of medical parts.

Several standards set limits for pyrogen levels in water. The USP water for injection limit is 0.25 endotoxin units (EU) per milliliter (mL) of water. The ASTM D1193 Grade A and Grade B endotoxin limits are 0.03 EU/mL and 0.25 EU/mL, respectively.

The Apple Rubber water purification system is capable of producing non-pyrogenic water. Our specification limit is 0.25 EU/mL with associated action and alert limits. Endotoxin testing is conducted by sampling the product water and performing associated testing with an outside lab.