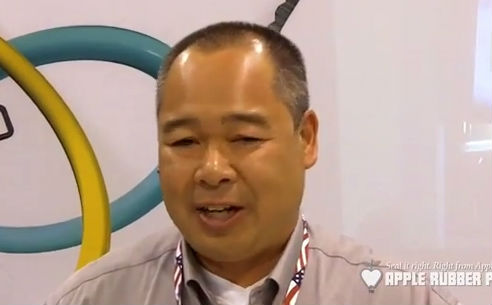 Over the next several months, the Apple Blog will introduce our readers to various members of the Apple Rubber team. Our first profile: Romel Ner, an Apple Rubber project engineer operating from the West Coast.

Hi, Romel! First, let’s get some of the basics out of the way — where are you from? Where do you live now? Where did you go to school, and what was your field of study?

I am originally from the Philippines. I came to the United States when I was six years old. I live in California. I have a bachelor of science degree in mechanical engineering and a master’s degree in business administration from California State University, Long Beach.

What drew you to engineering, and to this specific area of work?

As a child, I was always finding ways in making my toys go faster and fly higher. Even though it ended up in smoke or 1,000 pieces, it was an awesome feeling to know that I was able to push the performance limits.

My father introduced me to mechanical engineering. Taking things apart and trying to put them back together became our quality time. He instilled within me an ideology that working on things is not simply about replacing parts, but understanding how that part fits in the entire cycle.

The industry language in understanding how things work and making them better is engineering. From material science to gear design, from a dampening system to a third order differential equation, engineering is all about designing a widget efficiently with maximum performance. I started as an applications engineer for a metal spring energized seal company. When the standard catalog part was not sufficient, I got involved. Just like when I was a child, it was all about taking it apart and making it better.

When did you start working with Apple Rubber? Can you explain what kind of work do you do for the company?

I have been with Apple Rubber as a project engineer since 2000. I work with engineers in integrating Apple Rubber’s products into their design to achieve maximum sealing efficiency.

The standard protocol for most prototyping projects is for the design to originate with engineering, and then transition to purchasing for procurement. I noticed a trend that there was always a loss of information when translating from engineering to purchasing. Details would be dropped. Special accommodations would cause red flags to go up in order entry.

My role has expanded to dialogue with engineering, as well as purchasing. This bridged the gap in communication between engineering and purchasing.

Can you give an example or two of projects that you’ve worked on that you have been especially proud of? What did those projects entail?

Every project is unique and has its own twists and turns. The most satisfying aspect in my position is not whether or not the project succeeds, but realizing that I was successful in translating to the engineer the design philosophy of sealing products.

Synergy is achieved when these two points merge. It is absolutely amazing when the other engineer is the first to exclaim, “Well, no wonder it didn’t work!” This is a strong signal that my explanation of the parameters required to make an O-ring properly function was understood. He adapted it to his application and found the problem. Awesome!

What are some of your interests outside of engineering? What do you like to do in your free time?

My interest outside of engineering still deals with engineering. I dabble with radio-controlled airplanes. Is putting the control horn closer to the hinges putting less load on the servo motor? I also try to fish, in between vomiting and seasickness. Even with fishing, I am trying to figure out what makes them tick — do they like silver lures or live bait? Is the retrieve rate too fast, or should it be variable? This is why I believe engineering is second nature. It’s not only work, but a part of life.