How Did the Micro-Miniature Seal Help the Chickens?

The Problem: Seal failure resulted in chickens being grossly underweight.

Chickens on several farms weren’t drinking enough water due to a malfunctioning seal in a feeder. As a result, the chickens weren’t gaining weight and were underdeveloped – a costly situation for the farmers, and the equipment manufacturer, who had guaranteed the feeders and sold millions around the world.

After visiting the manufacturer’s facility to investigate, we found two potential sealing problems: the O-ring around a small rod would often stick and not allow any water through, and the potential for the O-ring to be completely blown off the rod by the high pressure of the system allowed for too much water to spray through.

The solution: We provided a working prototype and redesigned part of the equipment.

We first had to consider the environmental factors. The water differed dramatically in various areas. In one area, the water was heavy in mineral content, while in another, it was heavily chlorinated. The system was often used to administer nutrients and medicines, and was cleaned with high pressure water and solvents. This seal had to withstand all of these factors. No easy task!

After taking these factors into account, we presented two sealing solutions. The first was a micro-miniature seal made of fluorocarbon, which would withstand the environmental factors and act as a seal and force limiter to eliminate the potential sticking and blow-off. Unfortunately, the seal showed a weakness as a force limiter. Our second solution was a rubber-bonded-to-metal seal. The metal became the force limiter, so the seal only had to seal. The metal bond added the stability to eliminate potential swelling and disfiguring.

Although it required some tooling and changes to the feeder, the rubber-bonded-to-metal custom seal was chosen by the manufacturer. Now the chickens no longer have a drinking problem, and are living a healthy life style! 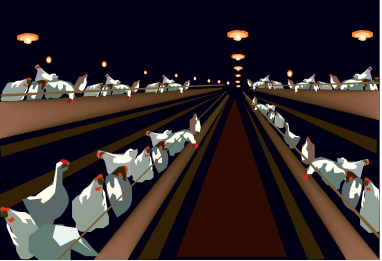 How Did the Micro-Miniature Seal Help the Chickens? was last modified: April 16th, 2012 by applerubber