Here’s Everything You Need To Know About 3D Printed Drugs 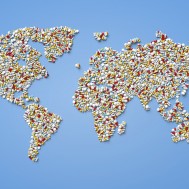 Whether 3D printing is igniting another technological revolution or it’s an agent of disruption within a particular industry seems to be up for debate. What cannot be challenged, however, is its undeniable impact — specifically on the medical field, one area where the effect and potential of 3D printing simply cannot be understated.

3D printed drugs are yet another case of technology challenging the traditional aspects of a specific field. In medicine, it will improve distribution options and allow for personalization of pharmaceuticals. The method will be more patient friendly, too, so that pharmaceuticals (a somewhat universal industry), will now be more individualized.

Here are some of the new developments on the effects and potential of 3D printed drugs.

3D printed drugs will be tailor made to an individual.

The main objective and one of the biggest benefits of 3D printed drugs is how they will be able to be constructed with an individual’s specific requirements in mind, and even created in line with certain preferences. Factors like the size, dose, appearance and rate of delivery of a drug can be controlled.

In June 2015, it was reported that University College of London was experimenting with printing drugs in various shapes that would presumably appeal to children, such as dinosaurs and octopuses. The first FDA-approved drug which treats partial onset seizures is attractive in that it dissolves faster than the average pill.

It will create the desire for individuals to have their genes profiled, as this is how more opportunities for personalized drugs will increase.

The new challenge is to build a drug to be printed from scratch.

“Formulation science” refers to the way that thin layers of powdered medication will be the makeup of a printed drug, which will be built layer by layer, as the printer stacks different medications atop each other. Current 3D printing methods can assemble and add enhancements to ingredients, but the new test will be to build a drug completely from scratch.

The process itself currently consists of binding the layers of power together by a means of interaction between powder and liquid. The liquid is specifically dropped to a point on a respective layer which bonds the ingredients. The method also functions to blow away the excess powder.

The process itself will reduce costs in drug manufacturing. It still, however, fails to be cheaper than the traditional tablet machine when it comes to pharmaceutical finances. The process is still appealing because it has the potential to regulate and calculate drug production.

The first 3D printed drug approved by the FDA is for epilepsy patients.

Spritam, a 3D printed drug that treats onset seizures, was made available on the U.S. market in early 2016. It’s especially ideal because of its porous quality  and designed for those who skip regular drug doses, resulting in ineffective treatment outcomes.

One of the drug’s benefits is that it’s easier for the average patient to take, Spritam disintegrates in the mouth when taken with water. It opposes the occasional difficulty associated with swallowing a pill. The CEO of Aprecia Pharmaceuticals, the company that made Spritam available, said that in the near future, a real importance will lie in identifying which diseases need more patient-friendly forms of medication.

Thomas West, the project manager for Aprecia, says that another one of Spritam’s benefits, is that it’s a premeasured dose of a high-dosage medication, increasingly effective for epilepsy patients.

3D printing will not disrupt the existing drug industry.

3D printing technology will not dispel the need for pharmaceutical companies, as people will still have to order the bases for their printed drugs through a licensed distributor. Instead of storing traditional tablets, pharmacists will have reels of the base product on hand, and will then customize the dose and shape of the table to our individual needs.

Another concern for some would be that 3D printing would create an opportunity to distribute illegal drugs as well, stimulating their distribution and trade. But there is nothing about 3D printing technology that would be able to optimize production of say, ecstasy, that would improve upon current ecstasy production.

The way we regard pharmaceutical safety is likely to change.

This is yet another method of technology that gives power to the individual consumer. It brings an element of personalization to the medical field, a field which traditionally favored universal methods and cures. Patients will be taking medications constructed exactly for them.

However, with this individualization, come questions about legalizations and liabilities that we never had to ask before. The manufacturing of a mislabeled drug could have serious implications, and call into question how long the time frame would be before an error in production was identified.

A representative from Deloitte questioned which factor in the process would be identified as the medical device: the printer, the ingredients, or the person regulating the manufacturing. In other words, where would the liability lie when a drug causes an adverse reaction? We continue to anticipate potential solutions for questions like this, and adapt to relatively new technology that continues to challenge the norm.

The future of 3D printed drugs

What are your thoughts on 3D printed drugs? Let us know by tweeting us at @AppleRubber.

Here’s Everything You Need To Know About 3D Printed Drugs was last modified: February 5th, 2018 by applerubber