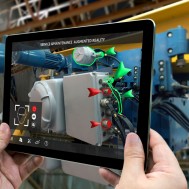 The market for augmented reality and virtual reality in the United States is projected to grow at a compound annual growth rate of over 37 percent between 2015 and 2020.

Unlike virtual reality, which is an artificial, computer-generated simulation of an environment or situation, augmented reality works by combining digitally generated information with a person’s physical world.

By using AR technology, such as Microsoft’s HoloLens, Samsung’s Oculus or DAQRI’s various devices, manufacturers have the potential to access an abundance of information for any object that is connected to the Internet of Things.

Here are five ways the use of this AR technology is transforming manufacturing.

Augmented reality allows plant operations to save time, money and resources — ultimately increasing productivity. These tasks include anything from product information, assembly instructions, and operating procedures to checklists, floor plans, and safety reminders.

Lockheed Martin used to require engineers with many years of specific training to assemble their places. Recently, though, the company began using augmented reality glasses and accompanying software that provide real-time visuals during the plane’s assembly.

These transparent glasses incorporate a front-facing camera that uses motion depth sensors to overlay images onto the technician’s working environment. The software has been extremely successful — allowing engineers to work 30 percent faster and with accuracy up to 96 percent.

Production downtime can cost a manufacturing organization hundreds of thousands of dollars. By implementing an AR solution, engineer technicians quickly and easily detect an error, identify the part of the machine that needs attention and access instructions on how to fix the issue.

ThyssenKrupp, an elevator manufacturer, is arming its field repair workers with HoloLens. Once an IoT sensor detects that something is going to break, it lets employees know and informs them of the proper tools they need to bring along. Then, they use HoloLens to get the instructions sent straight before their eyes.

Additionally, the company’s AR technology allows for remote support. Using tools like Skype, technicians are able to share streaming video with off-site employees — which is helpful when they’re dealing with knowledgeable veteran employees who are unwilling to go out in the field.

Previously, manufacturing leaders had to spend a lot of time and resources training trusted employees to create their complex products — and even then, there was always room for human error. With AR, companies are able to produce a lot more for a lot less — without increasing their workforce or the workload of their current workforce.

Bosch, for example, recently took a nationwide tour to educate service technicians on direct-injections and breaking technology. With 750 mobile stops, the company used the Oculus Rift headset to train between 8,000 and 10,000 employees on the inner workings of a car.

Manufacturing production errors and defects waste time, lose money and, in certain industries (such as medical or pharmaceutical), cost lives. No matter the company, quality issues also lead to legal concerns and lost of brand-name trust.

With AR technology, manufacturers can easily view information about a product, its part or its performance and not only tell if it’s functioning properly, but access instructions on how to fix it, if necessary.

Airbus, an aircraft manufacturer, uses Smart Augmented Reality to detect product errors. When it analyzes bracket installation,  inspectors use a tablet with a camera that superimposes a virtual image of the as-designed assembly over the actual as-built product. They’re then able to detect any deviation. The introduction of AR has reduced inspection times from three weeks to three days.

5. It allows for efficient design and prototyping.

When manufacturers implement AR, they’re able to experience all of the possible scenarios before actually inventing it. This essential step of the design process avoids problems before they arise, ultimately saving companies a lot of money.

Volkswagen, for example, uses spatial augmented reality, a technology that uses a projector to show virtual data on a real model (such as a vehicle or design model).

“The advantage of SAR in the design and development process is that the user can analyse the virtual data straight away in reality in a familiar environment,” the company’s website explains. “This means that the acceptance rate for this technology is extremely high.”

How are you using augmented reality in manufacturing?

Does your manufacturing facility utilize augmented reality? How has this changed your processes? We’d love to chat! Let us know and tweet us @AppleRubber.