3 Effects Robotics Will Have on Manufacturing

The Bureau of Labor Statistics reports that American manufacturers are the most productive in the world. Today, more than 12 million Americans are employed directly in manufacturing.

Thanks to advanced technology and automation, robots play a huge role in this productivity. We believe they will continue to do so for a number of reasons.

The Boston Consulting Group predicts that manufacturing labor costs could be 16 percent lower in the world’s 25-biggest export nations through 2025.

Safety is another concern in the manufacturing industry.

“At Apple Rubber, we use robots for the repetitive jobs that can cause long-term health issues for employees,” says John Tranquilli, materials manager. “With robotic pickers, we can eliminate those health issues as well as avoid any dangers associated with injection or molding machines. Robots save us money, time and risk.”

Many people believe that as robotics become more cost-effective, machines will end up doing more of the work that humans currently control. Not necessarily.

Rodney Brooks, co-founder of Rethink Robots, believes robots will help manufacturers automate tasks inside factories so that human workers are free to take on more creative and complex jobs. Robots would ultimately help with efficiency, not replace workers.

Brooks’ company will soon be releasing a new manufacturing robot, “Baxter,” that will be able to learn tasks, recognize objects and react intelligently to force. At a price of $22,000, Baxter is much cheaper than traditional manufacturing robots, too. 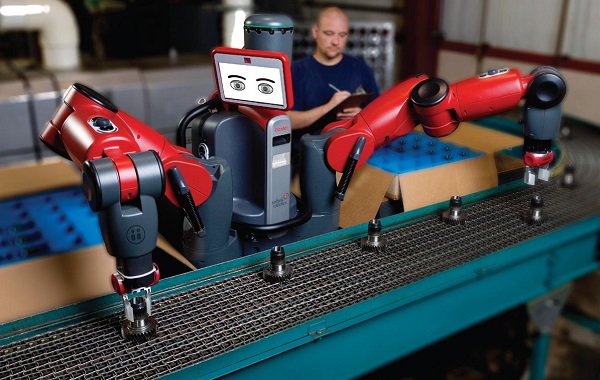 Baxter is the first of a new generation of smarter, more adaptive industrial robots that can work seamlessly alongside human coworkers.

Robots currently perform 10 percent of manufacturing tasks, reports the Boston Consulting Group. By 2025, however — as robots become more affordable and capable of performing more complex tasks – robots are projected to perform 25 percent of these tasks.

Increasing the use of robots will help create jobs as well as keep manufacturing work in the United States.

“We are spending hundreds of billions of dollars doing this kind of work in China,” Brooks notes. “We want companies to spend that here, in a way that lets American workers be more productive.”

“Robots will ultimately be the biggest job creators in history,” he notes. “Economic growth is about production. It’s about producing more with less. While the car erased all sorts of job functions, the prosperity that followed its mass production shows very clearly that the jobs were replaced with much better ones. This is the stuff of a dynamic, advanced industry.”

An increase in automation will change the way companies collaborate, operate and evaluate their processes – both now and in the future.

How do you think robotics will directly affect your organization or industry? We’d love to hear your thoughts. Leave a comment below or connect with us on Twitter @AppleRubber.

3 Effects Robotics Will Have on Manufacturing was last modified: March 6th, 2015 by dimillo